I think since it's NXT's version of PPV, it deserves it's own topic.

Tonight's line-up on the WWE Network: 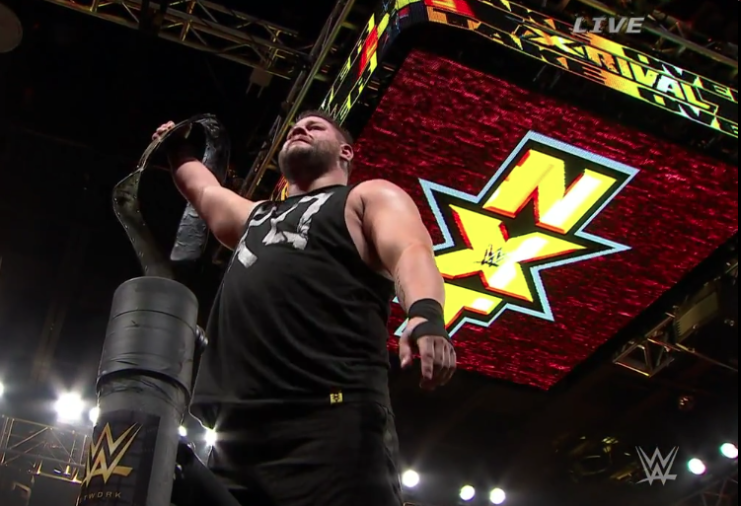 My God!!!!!! What a beautifully told story, that match was fucking awesome
Joe5150

Just finished the show. NXT is the best thing to ever happen to wrestling.

I have mixed feelings about this show. I mean obviously it was very good, I mostly mean in comparison to the other NXT Takeover shows.

The last 3 matches were all great. Balor/Neville was a fantastic back and forth wrestling match, the 4 way was a ton of action and showed the girls can have matches as fast paced and exiting as any of the guys, and the main event while not a great technical show piece, told a great story and is a great way to move this feud forward. Zayn lost, but wasn't pinned and never gave up, so it keeps him strong, and Owens KILLED him, so he looks strong. The more I think about that finish, the more I like it.

But the first 3 matches of this show may have been the worst string of matches in NXT history. Itami/Breeze was fine, didn't really like Breeze working the legs and then Itami just wins with kicks anyway, but it was a decent opener.

But Bull/Corbin and the tag title match, holy shit. In fairness Bull/Corbin was never going to be a good match, but it might have been worse than I expected. They had like 2 big spots, Corbin's finish and the over the top rope clothesline, and they fucked both of them up.

But the tag title match somehow topped it. That match was embarrassing for everyone involved. I've seen Chikara grads making their pro wrestling debuts look smoother doing lucha. DARE I SAY, this match almost reminded of the infamous incognito lucha tag match in CHIKARA. It probably seems like I'm really dumping on Sin Cara, but for what it's worth Blake and Murphy had no idea how to recover or improv, and even Kalisto had some problems here.

Yeah the tag match reminded me of why I don't always love Lucha, because a lot of times if you mess up there's no recovering. You either do the spot again or just stare at each other.

Also I wasn't thrilled with the finish of Owens/Zane. Like I think it's cool. But it felt flat, and not in the shocking I can't believe what's happening way. Then when they finally handed the belt to the heel, he received a pop for the title change, instead of fans booing him for murdering their favorite guy. I guess if Zane's win was all about that moment, Owen's win will be all about the title run, and ignore not really having that moment.


On a positive note, Owen's daughter wearing the belt was too cute.
Slayer

Blake & Murphy suck. They're bland, generic dudes who are just so plain that come out to awful dub-step music from the original WWE Network commercial.

Bull vs. Corbin was so pointless. Corbin had dominated him twice, and even pie-faced him in a backstage skit, so Bull has been a complete chump that has mounted no significant offense. This match was awful, and could have been done on a taped show instead.

Breeze vs. Itami was okay, but just out of place. Neither character really has anything going on right now, unfortunately.

The second half of the show was some high quality stuff. Everybody has heaped so much praise, that I can't really add anything more, so I won't.
SBR

I think Itami had had two good opponents so far in NXT, his one match with Balor and then his two matches so far with Breeze.

Also gotta say the one thing NXT has yet to get "right" is tag teams. Thought that would change with the Lucha Dragons but they were not over at all on Wednesday and the Dubstep twins suck so. Hopefully they do something to change things up.
_________________

WWE has never been able to present Lucha properly. Rey Mysterio is the anomaly, although he had a lot of experience working stateside (WCW) and he was born in the US. Plus, he came off more like a superhero rather than WWE trying to force the Lucha aspect.

I actually hate that NXT is on Wednesdays now because watching Lucha Underground before NXT makes me jaded towards Kalisto & Sin Cara. I mean, I know that they're good workers, but the WWE style, and the opponents that they have in NXT, hinders so much of their skillset.

The tag teams desperately need some work. After the Lucha Dragons won the belts, they got stuck in an endless series of matches with the Vaudevillains until they dropped the titles to Blake & Murphy. Enzo & Big Cass are hilarious, but they are awful in the ring. Jason Jordan & Tye Dillinger were getting showcased for a little while until they disappeared with Dillinger working occasional job matches.

I get that they wanted to get the Lucha Dragons over as the top team, but having Balor & Itami destroy The Ascension and then not challenge for the titles even once made that division look even weaker. They didn't even need to win them, but having them at least attempt to win them would have given the tag division a short-term boost.
CapitalTTruth

I sort of agree with the general consensus. Overall..... FANTASTIC show.

Itami vs Breeze was fine. Nothing really to say honestly. I really hope they get some direction for Itami because I have this terrible feeling they are going to mess this up. NXT really needs to do well in booking him because the WWE has a terrible track record of booking Asian wrestlers. He will need a lot of momentum going to the main roster.

The tag match got off the rials and never got back on. Forgettable, for sure.

Balor and Neville was fantastic. When Balor got his knees up and then rolled Neville after the Red Arrow, I marked out hard in my living room. Fantastic match, just what it should have been.

The women's match was really really good for what it was. There were a lot of really cool spots that were executed well. I am even more on board with sasha after that match. I hope none of them go to the main roster because that is a black hole for female talent.

The main event killed it. It did seem a touch flat at the end. It was somewhere between the excitement of a title change and the silent horror the story really summoned. This is probably the product of being in front of a regular audience that really enjoys being part of the show. They were too willing to cheer Owens for the moment to come off right. If this is the first chapter in a longer story between those two, it was good. If Zayne is going to the E soon, this will feel incomplete.
_________________
"Briscoe brothers, you damn dirty chicken farmers, we ain't done with you all by a long shot. West Virginia style son" - Necro Butcher
SBR